I woke up "in my 30s" last week. With all of the hullaballoo of turning the Big 3-0 last year (in Alaska! With a helicopter ride!), 31 feels mellow by comparison. Just another excuse for a fancy dinner out and lots of desserts. And plenty of time before the next big, round number, ahem.

Instead of a leisurely day, however, Mr. T and I woke up early. (EARLY! On my birthday! The horror.) We grabbed breakfast at Ettore's, a local Sacramento favorite. (Do try the cinnamon roll French toast!) And we headed to the airport.

Strangely, the day was cool, breezy and flirting with stormy, opposite of the previous day's sunny high 90s. Perfect day for flying, right?

Well temperature wise, absolutely. Thanks to blustery conditions though, I got to accelerate my thinking on take-offs, landings and taxiing with wind. Ugh. I say "ugh" because T started the lesson telling me about how not properly positioning the ailerons or wings while maneuvering in wind can, you know, flip planes over, cause ground loops (roughly, uncontrolled landings which often result in scraped wings or worse) and other quite scary sounding things.

So with my panic bubbles rising, we took off into the crosswind and I admit not relaxing until at least an hour into our flying time. Mostly I was in my head about potential death scenarios and frustrated that T's explanations of aerodynamics and wind forces on plane surfaces weren't sinking in. Ugh.

But, after a quick stop at Vacaville's Nut Tree Airport, we headed over a small mountain range to Lake Berryessa. At this point, I relaxed a bit. Even pulled out the camera for a few snaps.

And then someone pulled out the power and asked me where I was going to land.

I looked around. Behind me, mountains. Below a lake with rocky inlets. Lots of small peninsulas. A couple islands. Tons of trees. No real flat runway like areas. Ugh.

Now the good news is we weren't actually landing, of course. The dramatic reduction in engine power offered a lesson in gliding and theoretical emergency planning.

Although it freaked me at first, I got to see that there is really a good bit of time to configure the plane and make a controlled descent as long as you don't panic. So the fear that the airplane will "fall from the sky"? Not terribly likely except in extreme emergencies (like a mid-air collision or a wing falling off), or if you just stop flying the plane.

At least once more during our flight, T pulled out the power (which means the engine is still running, just at the lowest power setting). We chose a "good" landing place--a farmer's field--and circled over slowly, flying a landing pattern, descending gradually. Although it wasn't my favorite part of the day--getting close to the ground without a runway nearby--I appreciated the exercise of maintaining control of the flight, evaluating ground options and thinking through "what ifs." I am now infinitely more understanding of why flying over the Sierras and other inhospitable-for-landing terrain makes T's blood pressure rise. 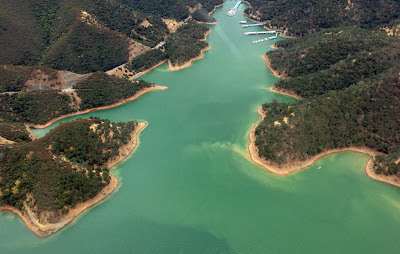 Although I still have a long way to go in my training, I'm pleased that with every flight, I feel more comfortable and less nervous in the plane. Here's hoping the irrational nerves disappear altogether one of these days! Until then, a few more photos for you...

P/S Any questions?? Leave a comment below or e-mail bluestmuse(at)gmail(dot)com.