Did I really just say that?

I'd prepared for a romantic date. A quick flight to Half Moon Bay. Time to practice my aerial photography. Fresh fish. Post-graduation relaxation. I should have known better when Mr. T instructed me how to pre-flight the airplane in detail.

After reviewing the plane from front to back, inside and out, we prepared to depart and I found myself utterly confused as to why T was getting in on my side. He ignored my protests and soon I was in the left seat. You know, where the pilot sits.

That's when I started freaking out.

I've been planning to learn how to fly, this summer in fact. But I'm an academic and a global learner to boot. I like to have background before jumping into a project. Instead, I got my first informal flying lesson.

Now, I wish I could say I was a natural. After all, I've flown a couple hundred hours as a passenger in various light aircraft. But no, at first, I was a nervous, sometimes panicked, squealing, swearing, nearly crying wreck who may or may not have hyperventilated right before talking to air traffic control for the first time. (Yes, T made me talk to the tower. At least initially.)

What struck me most was how different/weird/wrong flying in the left seat felt and appeared. After I taxied - like a drunk toddler apparently - to the run-up area, T instructed me how to prepare the plane for take-off.

I checked that the controls were free of obstructions by pulling the yoke to my chest, turning it side-to-side, pushing it back and repeating. I peered at the instruments, though they mostly meant nothing to me. I made sure both gas tanks were on, glanced to make sure the altimeter was correct, locked window latches and did a "run up" which means checking the engine by running it at high power for a minute to make sure everything is copacetic. When we were set, T called to the tower. Then:

T steered us to the runway. As we rolled forward, he instructed me to steadily push in the throttle which made the engine rev to life and after a few moments, the wheels left the ground. I'm pretty sure I squealed the entire time and got myself a little overemotional during our right turn-out.

You see, being in the left seat made me feel in charge but without any of the skills or know-how to do the job correctly. All of a sudden, a plane that I've spent 75 hours in as a passenger felt and sounded wrong. I felt like a huge poseur who was going to crash the plane at any moment.

As I alternated between screeching and swearing, T admonished me: "You are not responsible." Informal lesson numero uno did not put me in charge in the slightest. I was pushing buttons and holding the yoke, but T was in control. Once I realized he wasn't going to let me do anything egregiously wrong and that I wasn't going to make us fall out of the sky, I began to relax. Sort of.


My tasks for our flight from Sacramento Executive to Half Moon Bay involved flying a heading (direction) and maintaining a specific altitude. I got to play with turning the plane, pitching down to descend, pulling up to climb, "trimming" once I found a good equilibrium. (More on this vocab later!)

I marveled when I realized how busy and intense these tasks seemed as they are but a small percentage of what it takes to actually fly an airplane. T, for instance, stayed in charge of navigation, looking outside for oncoming traffic, keeping us in the correct airspace, monitoring instruments for abnormalities, etc. Initially, I felt so task saturated and focused on doing it right that the whole enterprise of flying felt overwhelming and not fun at all.

And then as we leveled off at our cruising altitude, I got a handle on my workload and realized that for the first time, I actively helped get a plane off the ground and keep it in the sky. And that was pretty damn awesome. It didn't hurt that by this time, we'd come upon San Francisco and the Golden Gate Bridge. Not bad for a first left seat flying adventure!

I maneuvered us just to the right of the bridge on the Sausalito side, heading out over the water. We stayed a mile from the coast and at about a thousand feet thanks to a layer of clouds above.
Hugging the coast line, we continued to Half Moon Bay where all of my groovy zen happy feelings disappeared as I realized that in order to get to the calamari, we'd have to land without crashing (at this point, you're questioning whether I really have a Ph.D., eh?). Luckily, T cut off my anxiety by reminding me of my not-in-charge status, and inviting me to hold the yoke and keep my toes on the rudder pedals so I could feel what he was doing with the plane. With one hand on the yoke, and one on the throttle, I helped (in the loosest possible sense) get us to the ground.

The details of the touchdown were lost in an 80 mph blur, but I remember wiggle-waggle taxiing off the active runway, alternatively going too fast and then nearly coming to a half with T crying "RIGHT RUDDER! RIGHT RUDDER!" more than once. 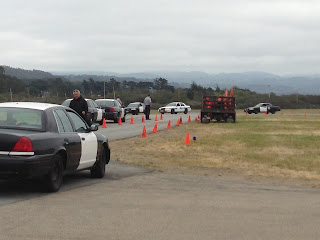 As I trundled us toward where the transient parking is usually located, we saw a bunch of out-of-service police cruisers screeching wildly around a closed course practicing high speed maneuvers. Shutting down nearby, we deplaned and I felt my stomach, back and neck muscles unclench for the first time since take-off.

Since the cops' course blocked the entrance to harbor area and they wouldn't let us walk around, we hitched a ride with a friendly officer. Almost before I could fasten the catch on my seat belt, we were hurtling through the course at freeway speeds, and I squealed with glee at the impromptu roller coaster ride.

After bidding our driver goodbye and watching him roar off in a cloud of tire smoke, we walked to a favorite bar and grill on the harbor. While awaiting our calamari and Arnold Palmers, we debriefed the flight and I peppered T with questions about procedures like flying "the pattern" for landing and the differences between fixed pitch and constant speed props. In turn, T explained vectors, stalls and a hundred other things though I admit, my ability to absorb new information petered out halfway through our meal. 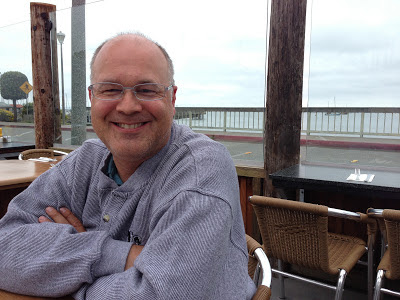 Following lunch, we headed out, me taking an extended time taxiing (so what if I missed the turn off?) and announcing to "Half Moon Bay traffic" that we were "departing runway tree-zero" with a right turnout. (When speaking over the radio, some words are pronounced differently to reduce confusion, i.e., three = tree. More on that later.) The good news? Unlike our departure from Sacramento Executive, I found that take-off exhilarating instead of terrifying, and I pretty much did it all myself.

Retracing our course, we followed the coastline back towards San Francisco, this time flying over the bridge on the opposite side nearer to the city. Buzzing over the bay, I watched as Angel Island and Alcatraz disappeared below and the sun started to sink lower on the horizon.

After a gas stop at the windblown Rio Vista airport, we landed at Sacramento Executive and spent the drive home again debriefing the whole flight experience. Despite feeling nervous and overwhelmed, I can't wait to get back out and fly again. Goal for next time? No inappropriate swearing or squealing. (Hey, one can hope.)